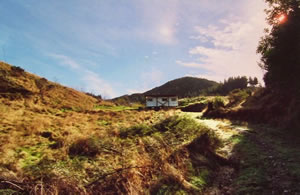 Back in 2003, I arranged a work secondment and went to live in New Zealand. I lived there for seven months, in a static caravan in the badlands of the remote NZ bush, or as the locals say, the wop-wops. The following articles are a few selected highlights of the full-length and not quite finished book "Wop wops - Off the beaten track in New Zealand."

Living in a caravan in the New Zealand bush
A little of life in the caravanFalling of a cliff in the New Zealand bush
I drive off the edge of a cliff...A cold winter in the New Zealand bush
Old Man Southerly comes a'visiting and Jon goes feralFly- by- wire: a review of being strapped to a rocket in New Zealand
Strapped to a high - speed rocket and fired into the air!Franz Josef glacier - flying by helicopter
A helicopter ride into a world of ice tunnels and potholes.Kaikoura whale watching with the Maori
Sperm whales and frisky dusky dolphins.Kapiti Island tour with the takahe, weka but no kiwi
A trip to Kapiti Island to see thieving kakas and the resurrected takeha...Kiwi bird in Nga Manu, New Zealand
Furry rather than feathery, with an outlandishly long beak, the kiwi bird is New Zealand's most unlikely national icon.Oamaru - the penguin capital of New Zealand
Don't keep your penguin in the freezer!Skydiving at 15,000 feet in Taupo, New Zealand
Falling out of a place at 15,000 feet. Argh!!!!Milford Sounds - exploring New Zealand fjords
Exploring New Zealand's fjords.Tongariro Crossing: the greatest one day hike in New Zealand
Join me for the best one - day walk in the world...TranzAlpine Express, from Christchurch to Greymouth by train with Charlie and Rambo
Arthurs Pass, Rambo and tales aplenty on NZ's legendary train journey.Drought in the New Zealand bush - getting thirsty in the caravan
Life in the bush with too little, then too much water.