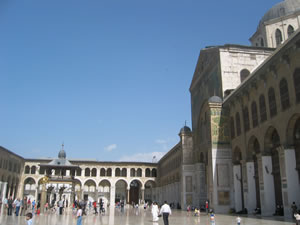 Looking out from the apartment balcony, every block of apartments is buried beneath roofs of ageing, rusting satellite dishes. The last President had attempted to ban satellite television. One night, the police raided the roofs, removing the receiver heads from the dishes. Within a few days, unperturbed, everyone had bought new receivers and continued to enjoy their Mexican soap opera's, MTV and international news broadcasts. When President Bashir succeeded his father, Hafez al-Assad, he relented and liberalised the law. The world might not know much about Syria, but with several thousand channels per household, many Damascenes have a wider a choice of television than most people in London.

Sharing a taxi with friends we following the herds of traffic, cars poured relentlessly into the centre of town, under a thick haze of fumes. A faded billboard advertised the 'Future Hotel', a time capsule of 1980's kitsch. A young man stood in a black leather jacket wearing an eye-patch, whilst another posed in a pair of reflective silver Ray Bans, the girl dressed like a particularly outlandish Cyndi Lauper.

Twenty-first century Damascus can be a very disorientating place. A curious mish-mash of styles and eras, the fashion casualty signs of the 1980's gave way to the timeless but ancient souqs of Al-Hamidiyya.

Stepping through markets who have sold their wares uninterrupted for two thousand years or more, a relentless hotchpotch of bazaars and stalls, coloured fabrics, piles of leather shoes, cheap plastic toys, bronze door handles and even dentists competed for customers attention. Cars sluggishly but persistently accelerated and braked along the narrow street.

Shards of sunlight pierced the iron roof like stars in a planetarium, peppered with bullet holes dating back to the French invasion of the 1920's. The souq was an assault on every sense. Amongst the commotion of spiced scents and sounds, different sections of the market specialised in different goods. It was like walking through a vast and ancient department store and there was little that couldn't be bought along Souq Al-Hamidiyya, or one of it's many surrounding side streets and alleyways. A pair of wrinkled old men sat on piles of Persian rugs chatting, whilst women covered from head to foot in black robes rummaged through piles of frilly knickers for sale. You have to wonder what they're hiding under those veils... 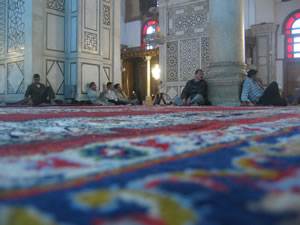 Approaching the entrance to Umayyad Mosque, copies of the holy Quran were stacked high upon trestle tables, eager to capitalise on their location, under the shadow of the "Islamic most famous mosque." Capped with three decorative minarets and domes, Umayyad is considered one of the most magnificent mosques in Islam and an architectural role model for every mosque built ever since. Stopping to jot a few notes in my journal, a pair of curious young men stopped to watch me. Unsure if I was liable to attract the wrong sort of attention from the authorities, I tucked my book into my inside pocket and continued my way.

Approaching the first entrance, I was turned away and pointed towards a ticket office. A small hand painted wooden sign 'Putting on Special Clothes Room' hung above a doorway, where I entered and paid my entrance fee. Black and white robes hung upon a series of coat hangers. There was no need for me to dress up as they were only required for women. So I continued my way to the Bab al-Amara entrance, handed over my walking boots to an official in a small wooden booth, and stepped into the open courtyard.

An expanse of marble flooring was surrounded by walls of gilded mosaics portraying an idyllic forest, along with geometric patterns interlacing through the floor. Compared to the mayhem of the surrounding souqs, the courtyard was an oasis of peace.

Obeying the golden rule of tourist attractions, the courtyard was mobbed with pigeons, resembling St Marks or Trafalgar Square. Families and couples sat in the shade, chatting and appreciating their surroundings. Stepping into the prayer hall, the roof was supported by a series of wide stone pillars, the ground covered in colourful wall-to-wall rugs so that it resembled a vast carpet warehouse sale. Praying men surrounded a small green domed building near the centre of the hall. Sitting cross-legged and wearing little fez hats, they wouldn't have looked out of place in a Tommy Cooper convention. Peeking through the glass walls of the green dome, I was surprised to discover that inside was what looked like a canvas tent. Surrounded by offerings of coins and notes, the canvas housed a casket reputedly containing the mortal remains of St John the Baptist.

In an era of increasing suspicion between Christians and Muslims, my preconceptions were turned on their head as I discovered that the prayer hall was shared by both faiths, the Muslims pointed towards Mecca whilst the Christians prayed around the remains of their saint. The site of Umayyad infact predates both religions. Mentioned in the Old Testament as a temple to the Aramaean god, Hadad in the 9th century BC, Umayyad was turned over to the Roman god of Jupiter, later embracing Christianity and finally Islam in AD 636.

"Shoe baksheesh?" asked the uniformed man, smiling and holding my boots. I handed him a gold $25 coin, mindful of the tourism police standing nearby (there are police for everything here). Under the shadow of the mighty Umayyad mosque, I wandered the stalls looking for the Sayyida Ruqayya mosque, recommended to me as 'very beautiful and unusual.'

A taped tannoy broadcasts the Quran, its message distorting through the blown PA system, the rhythmic chanting eerily reminiscent of a lively football terrace. Exploring the side streets of ancient crumbling sandstone, I stumble across the mosque.

Entering the courtyard, it is apparent that I am the only non-Muslim present. Not only that, but if Umayyad had revised my expectations of a mosque, then this place shattered all remaining preconceptions. Inside, the building had been tiled in a myriad of mirrors. The effect was rather like walking inside a giant reflecting glitter ball, not what you might expect from a mosque dedicated to a holy Shiite saint. Male and female well-wishers are segregated to either side of the decorated tomb to pay their respects. Robed figures knelt on the cold marble floor. Although I'd been mindful to not put a foot wrong, the eyes of an old woman pierced me, as she peeked through her black ankle length hejab and stared at me with suspicion.

Was I committing some sin against Allah, which I was unaware of? I assumed not, since nobody else seemed to mind. Perhaps my thoughts betrayed me. I couldn't help imagine the mosque would have made a great venue for a party. Perhaps they were waiting for me to leave before pumping out some banging tunes and dancing amongst the UV reflections of their Persian disco mosque!