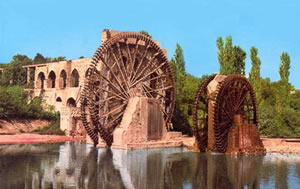 I arrive in Hama and after careful directions from a fellow passenger, I once again find myself wandering the deserted backstreets alone, disorientated and self consciously aware that everyone seems to be home or at the Mosque.

Following the high street, I stick my head around the door and ask directions from a storekeeper who appears to sell soft furnishings but spends most of his time having a quiet smoke. "Cairo Hotel?" I ask. He frowns slightly. "American?" he replies. "Oh God, no - la, la, la," I assure him, hastily setting him straight. I continue along the road and try again, where an abundance of plastic household items and childrens toys are on display. A youth stands outside and briefly tries to sell me a bucket. "La, la," I explain and again ask, "Cairo Hotel?" He looks blankly at me. I try again, slowly, but trying not to be the patronising Englishman abroad. "C-A-I-R-O Hotel?" His face transforms into one of recognition, "Ah, Hotel Cairo, yes?" At last, at least someone understands what I'm saying! But before I'm able to ask for directions, he points across the road and ushers me towards an old moped. "You're wanting to give me a lift?" I ask, but of course, he doesn't understand. I don't usually make a habit of getting on the back of a strange motorbikes, but it was one of those situations where you have to put your faith in the goodwill of strangers and hope for the best. Soon enough we're zipping between market stalls, dodging pedestrians and traffic until we arrive at the Cairo Hotel where I hand my enterprising friend some cash and we part ways.

There arent many hostels or inexpensive hotels in Syria and the Cairo Hotel was recommended in the Lonely Planet as "offering the best budget accomodation in Syria." It also happens to be located directly above a suspicious looking massage parlour called 'Hercules'. It doesn't much resemble a traditional Arabian hammam and I'm careful not to take the wrong door.

Having booked into the hotel, I go for an explore around town. Hama is renowned for its distinctive norias, wooden waterwheels which turn slowly with a terrible gasping, creaking sound. The town is buzzing with activity, but I don't stop until I find a restaurant in the old quarter of town and order a meal of mezze and lamb kebab. The room has a central fountain, wooden ceiling and bare stone floors as well as a view of the local youths climbing a four storey high noria and flinging themselves off, with a splash into the water. I like the place, it's atmospheric and I'm not deterred when I later discover the building once served as an Ottoman lunatic asylum.

On returning towards the hotel, I pass three hooded figures in black burkas. In the twilight, walking the narrow ancient sandstone lanes, too narrow for modern traffic, I again have the disarming sensation that the modern world had, for the moment, vanished. The bullet pocked stone walls quickly give way to the brash hustle and bustle of a modern souq where, in the last day of Ramadan, everyone is on a spending spree. There are entire stalls devoted to sweets, nuts, clothes, socks and one which sells nothing but plastic coat hangers. A roundish fella in a red fez offers a toke on a hubbly bubbly, calling out above the noise, what sounds to me like "Mustache, mustache!" Of course, I could be mistaken, but it's not half as unlikely as another whose shouting "Deborah Harry, Deborah Harry!"

Wading through the crowds and dodging the mysterious slippery oil patches, I return to the hotel to arrange a trip to the Byzantine ruins outside town. The hotel owner is a friendly bloke and seeing we're both on our own he asks that I join him for a cup of tea in reception.

"You are very welcome," he says, asking what brings me to Syria. I tell him about Mark, the girls, the dates and the hopeful engangement.

"He should come to Hama, your friend, we have many good women here. Many men in the Middle East come to Hama to find a wife. I have a friend, he is staying with us this week, also looking for a woman. For us, Islam says that the most important things in life are family and friends, and this is all. Everything else is, how you say, decorations; money, cars, a nice house. All these are nice to have, but should not be the priority. In the West, I think, many people have lost this and so they live a less good life."

I wasn't inclined to disagree, though I was surprised when he included having children as a decoration and not a priority in Islam, as he explained that children were a gift and a blessing from Allah. "But I fear things are changing now," he continued, "this obsession with money is an American influence. It is affecting our young people here. Now they are more interested in mobile phones and cars than their parents, and the war in Iraq will only make this situation worst." We were distracted a moment with the television mentioning the recent demise of Yasser Arafat. "Arafat!" my companion spat. "Why is he on the television? He is not a hero, he is just a man! Perhaps now he is dead, there will be a chance." He paused and explained his theory to me. "It is in Israel's interest," he confided, "to make peace with the Arabs. They have the largest economy and would dominate the region if our differences were put aside. Then maybe we can stop worrying about politics and spend our time on more important things," he laughed, "like finding a good woman!"