The hairy man and the hammam 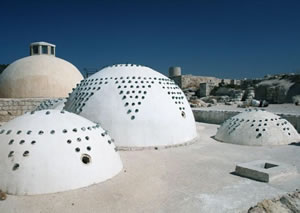 The Syrian city of Aleppo - self proclaimed capital of Islamic culture - isn't the sort of place you'd imagine stripping off in public, but like the Romans two thousand years ago, the Arabs have a long and rich tradition of public baths.

Now, put aside thoughts of municipal public baths and swimming pools, reeking of chlorine and filled with the sound of screaming children flying down plastic slides. The hammam is a place reserved for contemplation and relaxation.

The is a place of wonder and considered to be one of the finest working bathing houses in Syria. It was originally constructed in 1491, at a prime spot outside Aleppo's Citadel - conveniently located so that you scrub up before meeting his lordship after fighting the infidels during the Crusades.

Outside, the hammam looks something like a large igloo, albeit one constructed of marble. As I enter, I walk through a large indoor courtyard. The centrepiece features an arched domed roof above, with a fountain in the middle of a large room. It is empty, except for a man folding towels. I am surrounded by marble benches and take a seat, at a loss to know what to do next, except admire my palatial surroundings. Fortunately, I don't have to wait long before an assistant quickly brings me a pair of leather sandals and a small checked towel so I strip off and get changed, before being directed into a marbled corridor. A distant clang of metal resonates with a furious echo. I feel lost and not a little vulnerable as I walk lost and half naked around these strange surroundings. There is nowhere else to go but forward so I continue through the marbled labyrinth. The corridor leads to an antechamber, its tiled floor decorated with intricate geometric designs. The surrounding rooms are hexagonally shaped and bare expect for a stone basin. One room is filled with hot steam vapours so I sit down and relax, relieved to have found my destination.

Ah, this is what it's all about. I can feel the steam sucking the dirt from my pores. It's so hot, it's almost stifling, but unlike a sauna the heat is filled with moisture. After a few moments, I begin to unwind and forget the turmoil of the city. Still, I'm restless and I can't get over the feeling that it's a bit of an anti-climax. The room is empty and silent. Aside from the exotic dťcor of the marble, I could almost be in any gym or hotel in the world. I sit there, feeling the beads of sweat accumulating on my face until my peace and solitude is abruptly broken.

Standing in the doorway is an amply built Arab with an enormous portly stomach, his chest covered in thick black hair. He doesn't speak but beckons me to follow him. I'm not ashamed to admit that I'm more than a little nervous. I try to reassure myself. After all, what is the worst thing that could happen? Well, I don't want to go into detail but the possibilities seemed varied and unpleasant to imagine, so I stop thinking and follow the hairy man. I don't remember this happening to Michael Palin Ė and if it had, at least he had a nearby cameraman to cover his back, so to speak. 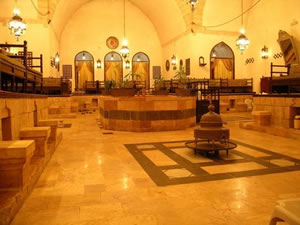 I lie down on a marble slab as the hairy man splashes fresh water over me. The metallic bowl is slammed onto the marble with a ringing clang. Ah, so that's what the sound was earlier. The hairy man then picks up a large white glove and proceeds to methodically scrub me down. Beginning with each of my legs, he methodically scrapes my chest and arms before scrubbing my back with a soapy abrasiveness. A diplomatic incident is narrowly averted as I somehow manage to explain to him to leave the towel around my waist.

More water is thrown over me and, cracking his knuckles, the hair man beings to vigorously pull and massage my shoulders, legs and arms, tweaking my frazzled nervous system into a stupor. Finally, he indicates that he's finished with me with a dramatic and almost violent slam of his meaty hands on my back. Oooph!

I stagger uncertainly back to the sauna to catch my breath for a few minutes before returning to the main courtyard. A man with a pile of fresh towels proceeds to wrap one around my shoulders and another around my head, until I look like a Bedouin who's just got out of the bath.

With some reluctance I wobble out of the hammam and into the dirty hustle bustle of Aleppo. I feel like I've been benevolently attacked with a cheese grater and have shed more than a couple of layers of skin, yet I've never felt so clean. I feel almost reborn, my skin soft as a peach but at the same time relieved to have averted another Syrian border incident...