Trouble near the Iraqi border 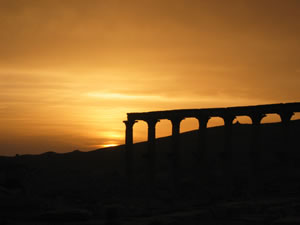 I was a hundred kilometres from the Iraqi border but such a considerable distance suddenly didn't seem nearly enough. According to the map, only an inch of desert and wasteland separated me from the ongoing war zone. This unsettling thought wasn't helped by the fact that I was utterly lost, alone and about to be at the wrong end of an Old Testament stoning.

I'd taken the bus to Palmyra, a vast complex of Roman ruins in the middle of the Syrian desert. Traveling on public transport, I'd been the only tourist to disembark at this stop. My fellow passengers continuing their journey towards the scattering of villages and Bedouin camps that straggle the Euphrates River.

Wandering down the main road, I continued on, walking through a series of back streets, passing increasingly shabby looking concrete buildings, looking out for one of the many hostels and hotels which ought to be in the vicinity. Instead, my surroundings become increasingly dilapidated - I had taken a wrong turn. I was attracting some attention too. An increasingly large posse of youths and small children were following me. 'Hello, hello,' they said, in faltering English, curiously reaching out to touch my hand and running away, laughing. In other circumstances I would have stopped and been more friendly, but the sun was setting, I'd had a long journey and I was keen to find my lodgings for the night. Politely, I shooed them away, before turning around to retrace my steps back to the main road.

I'm not sure what made me turn around, but as I passed the local Mosque, it's tinny speakers crackling whilst blasting out the Koran, I looked over my shoulder. A pair of kids were standing a couple metres away, with their arms outstretched behind them, each with a heavy looking rock in their hand. I could hardly believe it. Had they seen the Iraqi war on the telly and thought they'd give it a try? Or maybe they were imitating the young Palestinian refugees who pelt the Israeli tanks with whatever comes to hand - like some local version of Cowboys and Indians, and I was the unfortunate Indian. 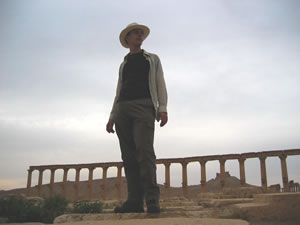 Caught in the act, they froze, staring at me, unblinking and not quite sure what to do next. Stepping towards them, with a 'la, la, la!' the commotion attracted the attention of a man across the street as he was stepping out of the Mosque. Realizing what was happening he shouted a tirade of Arabic at the kids, who promptly fled. What a relief. Waving at my Good Samaritan, I call out a friendly 'shrukrun' and continue along my way.

A short while later, I was safely ensconced in my hotel for the night. It was a bit of a dive. The bathroom hadn't been cleaned in awhile and there was a spent cigarette in the ashtray, but I was so relieved to be here, I couldn't have cared less.

"I'm very sorry," apologizes Mahran, the bored proprietor, looking up from the computer game he's engrossed in. "I don't know why they behaved like that. Bad children. Their parents ought to be ashamed."

I switch on the television to catch up with the news. Both the BBC's and Al-Jazeera's correspondents are discussing the battle of Fallujah. I must say it is a little unnerving, watching a Mosque being missiled and guerrilla warfare in streets, so remarkably similar to those I've been exploring these past few weeks. "A few days ago," calls out Mahran, who bored with his game, comes over to join me, "we had a family staying here, who'd fled Fallujah. They had crossed the border into Syria and were heading north, to a Sunni area near the border with Turkey. They didn't have any money, so I let them stay here for free. What else could I do?" he said, shrugging off this charitable gesture. We decided to change channels to escape the carnage.  The only other English language channel was showing Independence Day. The irony of watching Washington being obliterated - broadcast by a Saudi movie channel - wasn't lost on either of us.

Like many Syrians, Mahran had served his military conscription, patrolling the disputed border of the Golan Heights, which had been lost to Israel during the Six Day War. "It is strange," he commented sagely. "I spent two and a half years of my life defending my country from Israel, but in the all the time I was on the border, I couldn't see over the hills to this country we have been taught to hate. I have never met an Israeli and can't even search 'Israel' on the Internet, because the government blocks all the websites."

"Well, at least, working here," I pointed out, "the world comes to you, even if you can't very easily travel yourself,"

"Well, yes," agreed Mahran, "but someday I would like to have Israelis come to visit us here in Palmyra, so I could talk to them and share our history with them," he said, rather wistfully. Mahran's wishes seemed unlikely to come true anytime soon, but the invitation itself was an encouraging sign.

"The government tells us they are bad people, the Israelis, but we are like a family, the Jews and Muslims, and Christians too. We are like cousins. We fight, but don't all families?" It seemed a bit glib for me to point out the difference between chasing your wife/husband around the kitchen, and firing missiles into people's houses. Mahran's experience of Israel was quite limited, but he wasn't lacking an opinion on his own country and the people who ran it.

"We have a good joke here, about Syrian intelligence. There are two CIA, two KGB and two Syrian mukhurabarat and they all walk into the forest to hunt rabbit. The Russians and Americans leave with a large pile of rabbits, accurately shot. The two Syrians meanwhile are standing around a donkey. One is kicking it in the a*se and the other is shouting in it's ear, 'Confess that you are a rabbit!"

"So, they're not too smart these guys?"

"They are so stupid, it embarrasses me. When I was doing my military service, I told my C.O. I could speak seven languages and he was so ignorant he believed me! One time, I was introduced to the General of the Armed Forces, as the man who could speak many languages. I thought I was going to be caught. The General asks me to speak to him in Japanese. So I make up all this nonsense, which I thought kind of sounds Japanese and he believed me!"

I got another beer for myself and a coke for Mahran. The only other guests in the hotel tonight are a German couple travelling around the world by motorbike and sidecar, and three Danish people who sit down to join us.

"I had no idea we were so close to Baghdad," comments one of the Danes. "We just drove here from Damascus and there was a sign that read Baghdad - 172km."

"It is not so close," explains Mahran. "You do not need to worry here, you are quite safe, there is no trouble, but we did have a misunderstanding here only last week..."

Our curiosity piqued, we all leaned forward slightly in our chairs. Mahran was proving to be a masterful storyteller. According to the guidebook, the ancient tradition of the hakawati - the professional Middle Eastern storytellers who produced the famous The Thousand and One Nights - had virtually disappeared, yet the tradition seemed alive and well in Palmyra.

"An English couple wished to explore some of the ruins in the desert, so I arranged a taxi for them. So, they are driving along, when all of a sudden the couple start going crazy. The taxi driver, he told me, he didn't know what was wrong with them. He didn't speak any English. But they kept shouting and pointing, 'Palmyra, Palmyra!!' He doesn't know what else to do, so he turns around and drives them back here to Palmyra. The English couple, they jump out of the car, and they are telling me the driver took them to Iraq! I tell them this is not possible, Iraq is too far away. 'We passed a sign and it said Iraq' they explained. So I show them a map of the desert, and there it is, this little village we call Arak, but it is spelt I-R-A-Q." I exchanged glances with the Danes. We all laughed over Mahran's story, but sympathised with the terrified couple. Everyone we knew thought we were crazy coming to Syria – but Iraq? Not even my sense of curiosity extended that far...