Home > Syria > Driving and the highway code in Syria

When Syria was relegated to the toilet scrubbing league of international failures - 'The Axis of Evil', someone forgot to mention that Syria also qualified as a platinum plated, fully paid up member of 'Worst Places to Drive in the World Ever'.

To be fair, it is possible there are more dangerous places to drive. Lagos, Baghdad and Milton Keynes all spring to mind. But in Syria, the combination of manic population boom and a collapsing economy have created a nation of incompetent but ruthless taxi drivers. For $1000 Syrian dollars – aprox' Ł10 – any fool can become a cabbie for the day. The streets are filled with them. With their bright yellow livery, the taxis are perhaps the only single things Damascus has in common with New York. That and they're both driven by hell crazed lunatics who don't speak a word of English.

A combination of economic sanctions and Syria's own government imposing a high tariff on importing new vehicles has created a mini Havana, except without the beaches. It's not a surprise that the Syrians have become rather handy at recycling old cars. Ancient Buicks, dodgery VWs, clapped out Benz's and even old Austin's trundle around the streets. Each competes for space with the modern, but already bashed-up cheaper Korean Kia's. If Syria is serious about making a few bucks from tourism, they could do worse than hold a massive Vintage Motor rally and follow it up with the biggest banger race the Middle East has ever seen.

If driving is dangerous then crossing the road isn't any less of a hazard. Pedestrian crossings and traffic lights are typically ignored and traffic is dense and relentless. In-fact if it wasn't for the congestion, nobody would ever be able to cross the road. Entire families would be segregated by ring roads of traffic, marooning in their own block. To prevent this happening, Syrians have adopted a move that I believe is called 'the Egyptian shuffle'. Basically this consists of stepping out in front of multiple lanes of oncoming traffic. Slowly you step between the hurtling traffic, making sure not to move too quickly and make sure the oncoming driver knows which way to turn to avoid turning your sorry hide into a squidgy mess. As George Michael would put it, you gotta have faith, because getting across a busy highway in one piece is indeed a miracle. Of course, this being the Middle East, religion is everywhere. People do all kind of crazy things in the name of religion, it's worth dying for, worth living for, hell, it's even worth marrying for. Here, everyone believes in miracles. This miracle even has a name – Inshallah – that literally translates as 'God Willing.' The phrase is peppered liberally in any given social situation and indicates a hopeful optimism. For example:

Question - Is this bus about to leave soon?
Answer - Inshallah. 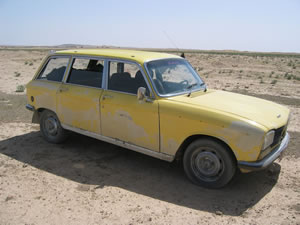 Inshallah could explain why Syria doesn't have a highway code. Curiously whilst Syria depends upon President Bashar and his Ba'athist cronies to run (or rather ruin) almost every aspect of their country, even the government isn't foolish enough to mess too heavily with highway patrol. In such a heavily controlled political climate, the roads are perhaps the only place where everyone is free to do, as they like. And it is a miracle because it actually seems to work, at least most of the time. In a month of travelling over Syria, in all the car and taxi journeys I have taken, barely anyone has been killed.

But it's not just the beaten-up cars and suicidal drivers. The roads have more holes in them than Syria's alibi that they didn't really murder the ex-Lebanese Prime Minister. To give you an instance, we hired a guide to drive us through the interior of the Syrian desert, past the Roman ruins of Palmyra and towards the Euphrates. We were travelling right off the beaten track, past places that few Syrians, let alone tourists have seen or even know of. One such town was filled with Mecca-themed graffiti. Murals of mosques adorned plaster walls, celebrating the return of Islamic pilgrims. The road itself was a thoroughly modern tarmac job and straight as an arrow. Yet, our driver steadfastly refused to drive down it. Instead he chose to bump and bounce along the dirt track that criss-crossed alongside the tarmac.

"Why don't you use the road," I asked. "There are many big holes in the new road," he replied, dropping his right hand several inches, to indicate a massive pot-hole. "We prefer to use the old road still, much better, only scratching the car, not serious damage."

The great irony was that we were travelling this route to visit structures that had survived more than a thousand years of wear and tear. After all, Syria is home to the longest continually inhabited city in the world – Damascus, and the world's first alphabet – Ugrit. This was once even a major stop on the Silk Road, the famed trading route between east and west. Today, I doubt even the camels would be impressed with this road, less than twenty years old and already decrepit.

So, as a favour to the terrified pedestrians and hopeless drivers of Damascus, I have had a stab at writing a short highway code to Syria. I hope it is of some use. Inshallah.

1. Accelerate rapidly at every opportunity.

2. Brake hard at every opportunity.

3. Accelerate and brake simultaneously at every possible opportunity.

4. Hit horn repeatedly. Remember that other drivers are not looking where they are going. Instead they prefer to shut their eyes and navigate by listening to the low frequency sounds of car horns, a behaviour similar to dolphins and bats.

5. Collecting small dents and broken headlights is to be encouraged. These prove you are an adept and experienced veteran of the Damascene roads.

6. If cycling, accelerate down the opposite direction to all other traffic. Wobble dangerously and erratically, preferably whilst towing a large cart of fruit or several members of your immediate family on the backseat.

8. Roundabouts. Do not give way to either the left, or right. Only you have the right of way. This is the will of Allah (Peace Be Upon Him.) You are also permitted to shortcut across the roundabout in the wrong direction and park in the middle of the road for no explicable reason.

9. Drive down both the left and right hand lanes of traffic simultaneously. In the event of an imminent collision, swerve at the last moment and shout in Arabic as loudly as possible 'Your driving could use considerable improvement my friend'. Or alternatively 'Kiss my ass!'

10. In the event that you are responsible for a road accident, hand bakshish (financial donation) to nearest police officer (he is the one in the uniform, with the gun, an open wallet and an expectant expression).

11. If you are hit by another vehicle and are not responsible for the accident, hand bakshish to nearest police officer.

12. If you have not been involved in any sort of accident whatsoever, hand bakshish to nearest police officer.