Home > Syria > Grenades and conspiracies in the National Museum of Syria 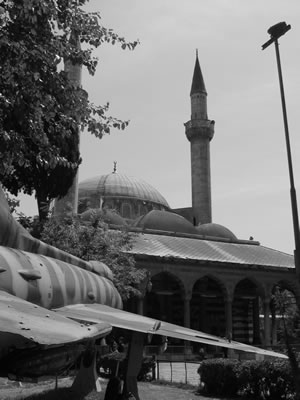 The National Museum of Syria was surrounded by an eclectic selection of historical rubble and Roman ruins. But I'd tracked the place down only to be told it was closing early for Ramadan. Fortunately, by joining forces with a coach party of English retirees the cumulative weight of our Syrian dollars extended their opening times a short while longer.

If the exterior had looked like a building site, its grounds scattered with colonnades and columns, then inside, the museum was a mess, filled with empty rooms and unlabelled cabinets with cracked glass. To ensure we didn't loiter, a rotund and jolly Mohammad Al Fayed lookelikee gave us the abbreviated guided tour. Disappointment turned to amazement as complete Roman mosaics were revealed, along with Palmyra tombs adorned with the likeness of Roman dignitaries, buried almost 2000 years ago.

At a brisk pace, Mohammad paused at a non-descript cabinet. "Ugrit alphabet," Mohammad explained simply in broken English. You would never have known, but scratched across the tablet's surface was the first recorded version of the Ugarit alphabet, the very first written language. It was the size and shape of a Brazil walnut, and wouldn't have looked out of place next to a cheese board. The next room contained a Jewish Synagogue, two and a half thousand years old. For a non-believer, it came as a shock to see the faces of Moses and Solomon peering out, as alive and vibrant as if from a photograph.

A small porcelain pot caught my eye, decorated with the Star of David. "What's this?" I enquired? Mohammad thought a moment. "Bombee!!! KAPOW", throwing his arms in the air, as he mimicked an explosion. It's a bomb, I asked? "Yes," confirmed Mohammad, "how you say, a bomb for your hand." It was a hand grenade, albeit one made of pottery. Continuing down the corridor, and passing racks of various blades and swords, we performed an impromptu recreation of the Crusades, swashing and buckling towards the exit.

Leaving the museum and walking down the traffic-clogged street, I bumped into Mohammad, who'd wasted no time leaving work to return home for Ramadan. "You from Britain? Tony Blair?" he asked. I shrugged. "Yes," I acknowledged. "Look, sorry about Tony Blair. We didn't know he was going to start bombing places." Mohammad nodded. "Queen Elizabeth. Princess Diana," he continued, placing his hand on his heart. "Prince Charles, push her!" He illustrated his views with a sharp shove of his hands. You mean, he had her killed, I asked? "Yes, yes, kill her, he did!" There are enough conspiracy theories in this country to fuel a hundred Hollywood plotlines.

Hailing down a taxi, I shared the journey with another fella who introduced himself as 'speaking English'. Making a little small talk, I asked what he did for a living. "Businessman," he explained. "Electricity generators, camels, Britain, France..." I was unsure whether he was just speaking random words at me, or involved in some unlikely camel powered electricity generator enterprise. Our attention was diverted by a brawl in the traffic outside. A young guy in white robes was dragging a balding man from his car by his collar. Around them, a group of women screamed and wailed in protest, slapping themselves in the face. The camel entrepreneur laughed and the taxi driver removed his hands from the steering wheel to mimic Rocky with a few shadow punches.

That evening, it was our turn to invite everyone over for another Ramadan feast. I sat and stuffed my face with olives and chicken, the only polite thing to do when nobody speaks any English, and my vocabulary doesn't extend beyond "Inshallah".

Fortunately, a cousin was visiting from Arkansas, where he'd emigrated some years previously. Fazel explained his reasons for leaving Syria.

"It's just so corrupt. You know when the President died a few years ago, he just handed the whole country to his son?" I nodded.

"Well, its not just nepotism for the top job. The entire Ba'athist government is dying off now, and their sons are getting all the jobs." He asked how I was enjoying Syria and I explained that I had just returned from a visit to the national museum.

"Its incredible," he agreed. "The history of this country is second to none, but most of the best pieces have been looted and ended up in private collections. It's a nice backshish for the authorities. It must add up to millions, if not billions of dollars."

Back in Arkansas, Fazel was a doctor. He also ran a charity importing prosthetic limbs into Syria, which is what had brought him back to Damascus. "These people are the friendliest you will ever meet," nodding to his family. "But they have some odd ideas. Even my own family doesn't understand why I bring these artificial arms and legs into Syria from America. Most of my patients here are mine victims. They've lost an arm or a leg. Charity is frowned upon, but there's no health service either. I had a case recently, where a generator blew up in a school, took a child's leg off. It's a shame. If I didn't do this, nobody else would care." Fazel took a sip of his drink. "Everyone is only interested in themselves. " I love Syria, this is my home, but I would never return. I have children and I like to bring them here to meet their family, but there is no work here. There are no opportunities and because the average age of the population is under 20, everyone is clamoring for the same few jobs." He shrugged. "Its not who you know here, it's who you blow."