Home > Syria > Wedding in the Axis of Evil (Damascus, Syria)

Wedding in the Axis of Evil 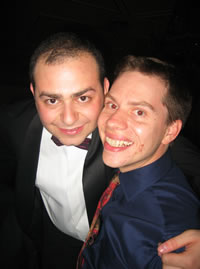 To recap, it's been sixteen months since I was last in Syria. My old friend, Mark, having endured one family orchestrated date after another in the pursuit of a wife, had finally met his match. A local Damascene girl, he'd met Marleine on another visit before returning to Lagos, where he now works. A few short months of long-distance dating, they were engaged by Christmas and soon planning their big day.

Well, that's not entirely true. Marooned in Nigeria, Mark left the preparation of his Damascus wedding in the hands of his family. This sometimes meant he was the last person to know what was going on.

"So I hear you're getting hitched in May?" I enquired.

"I am? Jonny, I've no idea. Sometimes I get phone calls from family telling me what's happening, but I'm normally the last person to know!"

It was early evening as we entered the Holy Cross Greek Orthodox Church near the old city walls of Damascus. Mark stood nervously outside the entrance with his brother and father. Inside, an usher staggered beneath a huge pile of flower arrangements. The flowers stood taller than a man and provided a forest of colour next to the paintings of darkened figures, illuminated by their brilliant golden halos.

Our fellow wedding guests, the women in particular, were a sight to see. The local Syrian women had spent the last several hours making themselves up into a showroom of elaborately dressed Barbie dolls.

One unfortunate woman wore a hat that looked as if a small bird had perched on her head and died. But the theme of the night was golden bling jewellery with strappy tops - as much as you can carry. A few of the women may even have pushed the boat out and had a bit of cosmetic surgery. It was a surprise to see so many women walking around Damascus with plasters over their faces after a hasty nose job. Whatever Lonely Planet says about a conservative Middle Eastern dress code - well you can forget it. Our fellow guests more like a bling mafia convention. 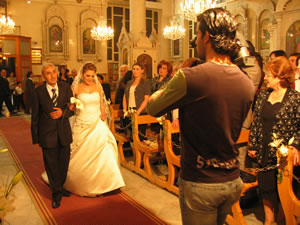 As is traditional, Marleine was led down the aisle by her father. Naturally attractive, she looked stunning in her traditional white dress. At first though, you couldn't see the bride at all. We were all peering over the shoulder of the ubiquitous cameraman who was documenting their every step.

This was none of your usually wedding camcorder activity. These wedding videos are serious business. As well as the cameraman, there's also the lighting guy walking along, carrying his spotlight aloft. The only problem is that on the big day you're forever looking over their shoulders to catch a glimpse of the happy couple as they try not to melt under the heat of the professional lighting.

The service wasn't so different to one you might see at home. Except that it was conducted in Arabic and I couldn't understand a single word. Gold crowns were placed on the bride and grooms heads, then swapped to symbolise their marital unity. Next, the bride, groom, best man and bridesmaid walked in circles, hand in hand, around the altar with the priest.

I'd been told that the Greek Orthodox claims to be the first of the Christian churches, predating even Catholicism. A moving and probably ancient ceremony, the moment was only slightly marred by the intrusion of the twenty-first century when a mobile phone went off. The guest even had the gall to answer it. Maybe it was God, telling him to switch his phone off or he'd get a good smiting.

As the service finished, a haunting cry emanated from some of the guests. It's called ululating. A high-pitched sound made from the back of the throat, the pitch rises and falls, back and forth. You may have heard it in the movies, usually just before the Arabs ride into battle and is commonly used by women to express celebration or grief. It was certainly atmospheric. Outside, accompanying the Bedouin battle cries, explosions of brightly coloured fireworks lit up the sky.

The service complete, we decamped to the hotel for a drink whilst our fellow guests changed into ever more elaborate dresses. With us were two young local Damascenes who had very strong views about the whole arranged marriage experience. I'll call them 'X' and 'Y' (not to conceal their identity as such, I just forgot to write down their names!)

"I will not marry someone of my parents choosing," Y explained. "What would I be doing? I must choose a man that I love."

X agreed. "Times are changing," he explained. "When you marry a woman, you are expected to provide certain things, a good wedding, a home, but money is very scarce in Syria now. It is very difficult for young people to afford such things, so now there is less pressure to marry."

But society hadn't changed so much. Be they Christian or Muslim, a bride is still expected to be a virgin and a divorced woman continues to be 'spoiled goods'.

"But divorces in the Middle East are increasing now," X explained. "So you see, people will soon realise that arranged marriages are outdated."

We posed a question to him.

"If it was you, would you marry a divorcee with three kids, even if it meant incurring the wrath of your family?"

"Yes," he replied. "If I loved her, I would. I love my parents but if they disagreed with my happiness, then, well, to hell with them!"

No sooner as we found our seats, the music was cranked up to full volume and the lights were dimmed. With a dramatic flourish, the doors opened and the newly wedded couple stepped into the room, bathed in light. Or at least the film crew did, swiftly followed by Mark and Marleine. It was an impressive entrance, theatrical almost. A huge round of applause swept across the room.

Then came the wedding cake. Towering over all of us, instead of candles, the cake was ablaze with huge fireworks gushing fiery sparks into the air. It was enough to singe your eyebrows. And it just wasn't the sort of cake you could slice with any old silver cutlery. Mark was handed a curved and extravagantly gold plated scimitar. Wielding the sword, he later told me. "I didn't know if I was supposed to cut the cake, or lop someone's head off with it!"

The mezze and beer flowed, but nobody was much interested in the catering. Instead everyone took to the dance floor at the nearest opportunity. The first dance was a Shania Twayne ballad, swiftly followed by Lebanese pop thumping from the stereo. Alas, there was no sign of any Jackson Five but otherwise there was everything you'd want from a wedding disco. There was even a mad uncle who insisted on dragging reluctant dancers out of their chairs. 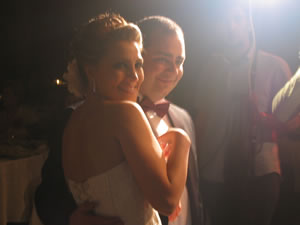 Who'd have thought it? Looking for love in Syria, the axis of evil, of all places and finding love. The search might have been over though, but make no mistake, this was just the beginning. Theirs has been a whistle-stop courtship, stretched over three continents. In many respects this happy couple were still almost strangers. But in the Middle East, falling in love takes time and a little patience, often long after you're already married.

To a westerner, this probably sounds like madness, marrying someone you hardly know. And to be honest with you, I'm not sure it would be for me. But the fact is that it works. As far as it's possible to tell, nobody seems any less happily married in Syria than back home in Britain. So I'm sure this wedding will bring every success and happiness for Mark and Marleine too.

Good luck to the pair of you, my best wishes to you both for a long and happy future.