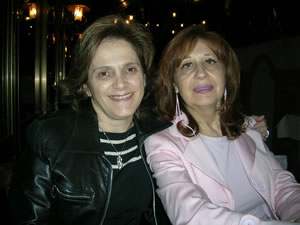 Showered and refreshed, I join Mark on the balcony. He's got another date lined up, one-on-one this time which is usually a good sign. I'm curious as to what he talks about on these dates, so I ask him. "Usual stuff," he says, "life, what you do, make them laugh and then talk about marriage, children, the future, that sort of thing." But it's only a second date I remind him, surely it's a bit soon to be talking that far ahead. "Johnny," he explains, "things move quickly out here, I'm not meeting these women just for a bit of boom-badda-boom, I want to get married." So you're not interested in the boom-badda-boom, I ask, knowing Mark well enough. "I'd love some! But that's not how it works out here," he answers, visibly disappointed. "But I've two weeks to get engaged, before we leave Syria then I reckon we can be married by Christmas, then plenty of time for boom-badda-boom!"

Later on, we pick up Mark whose just finished seeing his dates for the evening. He bundles into the front of the Mercedes. Sitting smartly in his suit, he's looking pretty pleased with himself. There's much boisterous slapping of backs and jeering, and we're all curious to know how it went.

"Well, its hard to tell," Mark replied, "I only actually spoke to them for five minutes, our families did most of the talking."

I'm finding it an odd concept, going out on a date with your family present - and theirs. In my experience, meeting the in-laws is usually put off until absolutely necessary. Yet, here in the Middle East, you are not just marrying the individual, but their family too. Although Mark's family is Christian, rather than Islamic, the process of choosing a partner remains more or less the same. Typically the mother orchestrates the meetings, choosing potential partners from a suitable family. The intended and their family are then invited over for tea (and several plates of food). The whole process sounds horribly like a job interview, sitting there, drinking tea in your best suit, on your best behaviour and trying not to say anything incriminating or foolish in front of your potential in-laws. At first, it seemed pretty ghastly. "You had a date with two sisters?" I asked, slightly incredulous. "You old rogue!" Smiling and shrugging, Mark explained how he'd been introduced to the older daughter first."

She's 25 years old now, they're keen to off-load her, at that age a woman's almost past it here. We chatted for a few minutes, then she left the room and they brought in her younger sister." So what was she like, I enquired, finding the whole idea slightly bizarre yet intriguing. "Pretty nice actually! Quite young - good body!"

Returning to the flat, we left the women to discuss the developments in the elegant living room, as I joined the men in the TV room. Our host, Ahmed, a genial and generous doctor, lay across the marble floor, stretched out like a sultan in his palace, dispensing his advice like prescriptions.

"Listen to me, family is very important, but its not the family you will be waking up next to every morning." Laughing, he added, "Make sure she's nice looking, got a sexy body" as he traced the outline of a curvaceous female figure with his hands.

A debate continues, comparing the relative merits of large breasts over smaller ones and the pros and cons of different bum sizes. Ahmed offers a bunch of grapes around. "Very sweet, much better than what you get in London, best in the world, go on, eat!" Their skins burst with flavour, and are quite delicious. I've been in the country less than 48 hours, but I've learnt that Arabic hospitality knows no bounds. It's better all round if you just surrender to every offer of food that comes your way, although I'm reluctant to abandon my 32-inch waistline. Mind you, there does come a time after your second plate of ground lamb kibbeh, rice, aubergine dip and cheese filled pastries when you can feel your arteries hardening. For my own sanity, I blocked any further servings with my hands, with a polite 'la, la, la' meaning 'no, no, no!' Trust me, a single 'la' just doesn't cut it.

I'm beginning to feel that I have walked into a Syrian soap opera as Omar bemoans his own women problems. We go for a drive, leaving the families to their discussions.

"What should I do," he implores.

"My girlfriend, she is very jealous and gets angry if I spend time with my friends and family. It's making me depressed..." I try and tell him to pull himself together, but its not always easy telling a fella that his girl is a complete loony.

We drive around in circles, not heading anywhere in particular, just cruising about. Why not? Negotiating the hectic roads is perhaps the closest thing to absolute freedom you can experience in this military dictatorship. President Bashir looks on, watching us from the sunscreens of passing cars and billboard posters.

Omar shrugs. "He's better than the last one. He opened a new college. Was a very good improvement." We pass a group of young people queuing to enter a brightly lit building, which looks like a nightclub.

"No," Omar replies, visibly disappointed. "The President does not allow nightclubs, he says they cause trouble." I try and lighten Omar's mood. "Maybe the President just can't dance?" I suggest.

"Yes, maybe!" he laughs. It turns out that there are a very few elusive bars in the old city. Picking up Mark, Omar reluctantly drives us through the narrow switch-back sandy catacombs of Damascus. "Its very bad for driving, too narrow and dirty, I hate this stinking old place!" Reversing and dodging the stray cats, crowds of people and oncoming cars, we are forced to abandon the car and set out on foot. Stepping between the rotting vegetables and animal carcasses we stop to ask the local market traders for directions to the Piano bar. Despite enthusiastic directions, we wander the labyrinth like alleyways, utterly lost. The old city is a shambolic but fascinating mess of smooth sandstone walls and timber pillars. First floor balconies jut out over our heads, leaning dangerously across the road like a medieval city. Looking at the surrounding buildings it would be hard to dispute that Damascus is a contender for longest inhabited city in the world. By the looks of the wonky door-frames and leaning, yellowing walls it was certainly in a time before the invention of the spirit-level.