Home > Syria > Hama: Viagra and the Brotherhood of Islam

Hama: Viagra and the Brotherhood of Islam 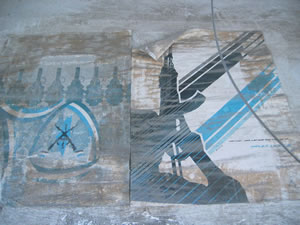 "In the west, first you sleep with a woman, live with her, then you get married, bored and split up. It is all wrong. It's how you say, upside down. Here, in Syria you must first marry a woman, and then you get to know her and fall in love."

It might seem a shocking way of going about getting married in the twenty-first century, but I imagine his attitude wasn't so very different from the Western rules of engagement, before the days of bra burnings and the pill. Our attention drifted to the television for a moment. It was tuned to Al-Jazeera Sport, and no, it wasn't showing Osama Bin Laden racing camels across the Torra Borra or jihad netball. The football was soon interrupted by adverts, featuring lively men of varying ages leaping about their well manicured gardens. They all wore cheery self satisfied grins on their faces. The screen faded and an enthusiastic Arabic voice made a dramatic announcement as a blue diamond pill popped up on the screen with a large 'V'. Hell. Was that really an advert for Viagra? The hotelier looked rather taken aback and admitted "well, times are changing here too."

Mark meanwhile had a date lined up in Hama, so we met up to see how things were developing.

"Johnny, I met a nice girl yesterday." He pulled out his phone and showed me a digital photo of a young lovely, fair with golden honey hair. "She's only seventeen, but I don't think this will be a problem. We got on very well." How long did you see her for, I asked. "About ten minutes," he answered, before adding "another ten minutes and we might be engaged!"

Further girls were lined up for 4pm, 7pm and 9pm the following day. Not that it sounds like an awful lot of fun. It's not like going to see a movie and maybe grabbing a bite to eat. The proceedings are formal and more closely resemble a business merger than a date. Not only that, but your parents have the power of veto. Mark's mother wasn't too keen on the seventeen year old.

"She is very nice, but the age gap, it is too much, Mark, she is too young for you to marry, habibi." The daughter of our host in Hama was also eligible, another prospective candidate for a short walk down the aisle. "What about her?" I asked during a discreet moment. She seemed nice enough, though her English was minimal. "Her eyes, they're too far apart," he pointed out. It might seem a little uncharitable, but I guess when you're looking at someone with a view to spending the rest of your life with them, you're best not mincing your words. After all, you don't want to be staring into the eyes of your betrothed one day, only to find yourself going cross-eyed.

As usual, I was utterly overwhelmed by Arabic hospitality and close to bursting with vine leaf wraps, houmus and cheese pastries. The brother of the girl whose eyes were too far apart took us out for a quick tour of the city. Mark and I found ourselves outside the recently rebuilt church. It was an impressive building, but struck me as peculiar since most churches in Syria are nearly as old as the Bible. Our impromptu guide hinted at some terrible violence in the recent past, but it was a sensitive matter and I didn't feel inclined to ask. Thank God for the Internet.

In 1982, much of Hama had been destroyed, its historic city reduced to rubble with overwhelming and lethal force. Who did this, I hear you ask? Was it crazy Saddam to the east? Nope, he was too busy tussling with Iran and the Kurds. What about Israel, who had whooped Syria's behind in the Six Day War, grabbing the Golan Heights? Nope. Was it neighbouring Lebanon? Not a chance, Beirut being pre-occupied kidnapping journalists and tearing itself apart in a bloody civil war.

Given up yet? Well, the Syrian city of Hama was in fact invaded by....Syria! I know it's difficult to imagine why someone would invade their own country but I suppose it must be convenient for one thing, plus it's less likely to hit back. The downside is that it's unlikely to win you many votes, but when you're a military dictatorship with 99% of the vote you don't much have to worry about disgruntling your electorate.

Like Saddam's Iraq, Syria is run by the Ba'athist Party, a peculiar mix of Arab nationalism and socialism which in practice involves the President redistributing the power and wealth of the country to everyone on his Christmas card list.

Perhaps understandably not everyone was entirely happy with this arrangement and there was increasing sympathy for the Brotherhood of Islam, who intended to overthrow the regime with a Syrian version of the Iranian revolution. The Ba'athist leader, Hafez al Assad had good reason to be worried.

The fundamentalists had been busy, having already assassinated Sadat, the nationalist Egyptian leader in 1981 and there was a real possibility the same would happen in Syria. In February 1982, the call for jihad emitted from these surrounding mosques and hundreds of Islamic insurgents attempted to seize Hama. It didn't last long. Fighter jets were scrambled and the city was pounded relentlessly with artillery shells. Government troops surrounded and stormed the city, rounded up the insurgents - and anyone else they could find - dragged them out of their homes and systematically shot or gassed them. You can still see the bullet holes. The scale of the massacre is frankly shocking, even by Middle Eastern standards and the death toll far exceeded the number of insurgents. According to Amnesty International, casualties range between 25,000 and 40,000 dead. And did it make the international news? Not a peep. The event was hushed up and buried amongst all the other terrible but more high profile events of the Middle East. Meanwhile, militant Islam and just about any other form of opposition in Syria were utterly crushed.

In Hama, life carries on of course and the relentless prayers and parties of Ramadan are currently in full flow across Syria. But it's a different world to similar shindigs in Saudi or Tehran. There are very few women wearing the black veil of the hejab, or as the US troops in Iraq nicknamed them, MBO's – Moveable Black Objects. I wouldn't care to imagine what the Brotherhood make of adverts for little blue pills on Arabic television, but I wouldn't imagine it fits comfortably with their ambitions for a 'purified and purged' Islamic state.